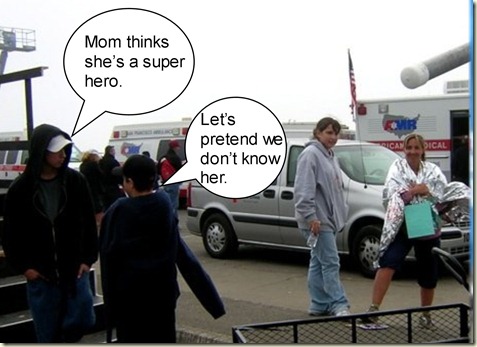 April 2005
Training for the marathon has become my respite from the dishes, the laundry, and the oozing hormones that are seeping out of every pore in our household. I decided to train after Kip was in a car accident. He swatted at a bee and a split second later drove through a telephone pole, taking out not only the pole, but most of the power in town. Rooms darkened, clocks stopped, and treadmills came to a halt as he called me on his cell phone and cried weakly, “I crashed, come get me.” The air bag saved his life.

When I saw the truck, I was amazed that he had survived unharmed. Standing on the street corner as the paramedics looked over my oldest child, I realized everything had changed the moment that bee flew into the car. It was the moment that all mothers dread; recognizing our own limits, realizing we are mere mortals who, try as we may, cannot protect our children from the dangers of the world. How on earth can I possibly keep my three children safe when something as small as a bee can land a telephone pole on their heads?

That’s when I decided to sign up for the Nike Woman’s Marathon; it became my way of making myself stronger, more powerful. I think somewhere deep inside I’m thinking I can regain control; that if I work hard enough I can become Superwoman and conquer the bee.

This is a photo of me as “Superwoman” after the marathon, unfortunately, I did not conquer the bee, but all three of our children have developed a love for running which is one of the things I hoped for when I was training for the marathon mostly because I wanted them to have a productive way to deal with their fears (Men in Bibs).

Worrywart’s Guide to Losing Weight and other Household Chores

Worrywart’s Guide to Looking Up (from the keyboard)

Worrywart’s Guide to the New Year

Worrywart’s Guide to Everything, but Weight Loss

Worrywarts Guide to Being Wrong

Worrywart’s Guide to Survival (without carbs)